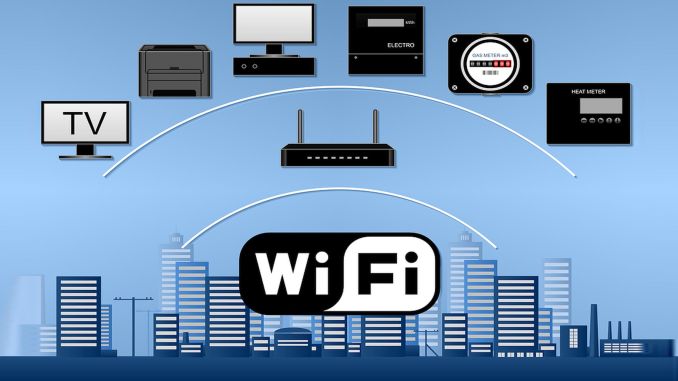 Do you ever have that moment where you step back and think about how something you use every day actually works? More specifically have you ever wondered how the heck computers actually communicate wireless ?

What Is WiFi ?
First, let’s cover some of the basics. WiFi stands for Wireless Fidelity and is the same thing as saying WLAN which stands for “Wireless Local Area Network.”

WiFi works off of the same principal as other wireless devices – it uses radio frequencies to send signals between devices. The radio frequencies are completely different say from walky talkies, car radios, cell phones, and weather radios. For example your car stereo receives frequencies in Kilohertz and Megahertz range (AM and FM stations), and WiFi transmits and receives data in the Gigahertz range.

To break it down even further, Hertz (Hz) is simply a unit of frequency. Let’s say you’re standing on a pier watching waves come in. As you look down at the waves you can see the crest of each wave roll on by. If you counted how many seconds between each wave crest this would be the frequency of the waves. So if the time between each crest was 1 second that would meant the wave frequency was 1 hertz or one cycle per second.

Comparing sea waves to Mhz and Ghz, these waves are moving at 1 million and 1 billion cycles per second in the air! And to receive the information found in these waves, your radio receiver needs to be set to receive waves of a certain frequency.

For WiFi this frequency happens to be 2.4Ghz and 5Ghz. These waves are very similar to the frequency found in your microwave! Your microwave uses 2.450Ghz to heat up food and your router uses 2.412 GHz to 2.472 GHz to transmit your data over WiFi. This is why some people with old or faulty microwaves experience a problem with their WiFi signal when they try to make popcorn.

Just to clear up a popular misconception: These microwaves are non ionized radiation That means that they do not cause cancer. That’s right kids, microwaves will not make you radioactive and glow in the dark!

There Are Many Kinds of WiFi

Earlier you found out what 802.11 means, but there have actually been several new versions since the original in 1997:

Each of these standards comes with various pros/cons related to data speed, signal interference from outside sources, and cost. Cost is a factor because different hardware is needed for different standards, though newer versions are made to be backwards compatible with older versions.