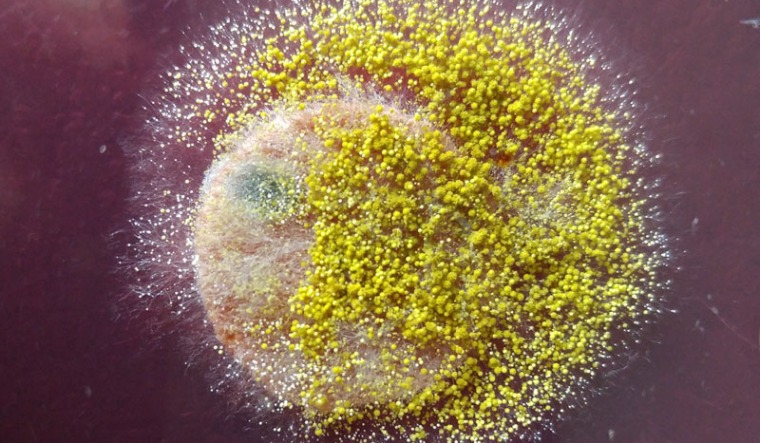 Mucormycosis (also called as black fungus) and white fungus have been found in increasing numbers among Covid-19 patients in many states across the country. Mucoromycetes, which is found in the environment, causes both black and white fungus, but because they affect the lungs and other essential organs, they can be exceedingly deadly. On Monday, however, news surfaced that a patient in Ghaziabad, Uttar Pradesh, had been diagnosed with \”yellow fungus.\” Dr. B.P Tyagi, an ENT (Ear, Nose, and Throat) expert in the district, diagnosed the first instance of yellow fungus, according to ANI.The patient, a 45-year-old Ghaziabad man named Sanjay Nagar, also has black and white fungus infestations. We take a close look at the three fungal infections and try to figure out what they have in common and what they don\’t.

What is Yellow Fungus disease?

Yellow fungus, like black fungus and white fungus, is a fungal illness, but it can be lethal and lethal because it originates internally — unlike the others, which have apparent symptoms. According to ANI, Dr. Tyagi stated that the yellow fungal feature frequently causes a delay in diagnosis. This feature of yellow fungus makes it difficult to manage and potentially hazardous, as early diagnosis is critical in such cases.

Loss of appetite, tiredness, and weight loss are all symptoms of yellow fungus. Patients with yellow fungus have severe symptoms such as sunken eyes due to starvation and organ failure, sluggish wound healing and pus leaking from wounds, and necrosis in the later stages of the infection (cell injury that leads to death of cells and living tissues).

Like mucormycosis, the treatment for yellow fungus is Amphoteracin-B injection.

The following are some of the precautions that can be taken to avoid contracting the yellow fungus:
I Keep your room, home, and surroundings as clean as possible; ii) Throw away old food and faeces as soon as possible to prevent bacteria and fungus growth;

iii) Control the humidity in the room and across the house, as high humidity encourages bacteria growth. Maintaining clean air flow inside the room and residence is essential, just as it is for Covid patients.

iv) Patients who test positive for the coronavirus must begin treatment right away to avoid consequences like yellow fungus. the Ghaziabad patient who has been diagnosed with a case of yellow fungus had been undergoing Covid treatment for the past two months and recovering from it as well. However, in the last four days or so the patient developed swelling in his face due to which he was unable to open his eyes. Then the patient began bleeding from his nose and in urine. He was rushed to the hospital where examination revealed that it was a case of yellow fungus.

What is Black Fungus disease?

Mucormycosis (formerly known as Zygomycosis) is a deadly but uncommon fungal infection caused by micromycetes, a type of mould. Molds of the order Mucorales induce rhino-orbital-cerebral-mucormycosis (ROCM). There are a few subgroups that are most typically engaged in this infection, including as Rhizopus, Mucor, and Rhizomucor. These fungi are angioinvasive, meaning they enter and damage the surrounding blood vessels, causing tissue necrosis and death. Molds can be found all throughout the environment, and their spores can be found in the air. They become trapped in the nasal cavity and the sinuses that surround it.

They ensconce themselves within the tissue once they’ve found a favourable environment. When the spores germinate, the hyphae (filamentous processes) enlarge and exude destructive fluids that destroy the host tissue while also feeding the quickly developing fungi. They damage the surrounding host tissue as they grow in the nasal cavity. The nasal cavity and sinuses’ bones are damaged. The hard palate, orbital bones, and skull base bones are among them. In the nasal cavity and oral cavity, black lumps can be detected. It may cause bulging of the eyes, discomfort, frozen eye movements, and blindness if it destroys the orbit and enters the eye socket.When it breaches the skull base and enters the cranial cavity, it plugs major arteries and venous lakes, resulting in life-threatening brain strokes and bleeding.

He went on to say that spores can penetrate deep into the respiratory system and become pleasantly embedded in the lung parenchyma (alveoli and bronchioles). The fungus multiply quickly in this environment, damaging lung tissue and jeopardizing blood oxygenation. It can then spread throughout the circulatory system, causing an existential crisis.

It’s a multi-pronged strategy. Here, time is of the importance. An endoscopic examination of the nasal cavity can confirm a fungal lesion if a clinical and radiological diagnosis has been obtained. Surgical debulking should be done right away. The procedure may be invasive and disfiguring, but it is justified given the existential threat of leaving any remaining tissue behind. The entire nasal cavity should be scoured and any fungal or necrotic tissue removed. If the orbit is implicated, surgery as extreme as exenteration of the contents of the eye socket may be required. If the infection has progressed to the brain, intracranial decompression may be required. Surgical intervention should be undertaken a couple of hours after diagnosis.

Medical management with antifungal medicines, specifically injectable Liposomal amphotericin-B, must also be implemented. Amphotericin deoxycholate, in its older form, is extremely nephrotoxic. The liposomal cousin, on the other hand, is both safe and effective. If the patient is unable to tolerate amphotericin, parconazole tablets, suspension, and injectable formulations are available. Following many weeks of intravenous therapy, the patient is switched to oral parconazole sustained release tablets for several months, depending on the response. Isavuconazole is another medicine that can be used as a substitute. After the disease has been cleared clinically and radiologically, the drugs are withdrawn. During treatment, careful use of steroids (to keep blood sugar levels in check), antibiotics, and other antifungal medicines is required.

It is always preferable to prevent than than cure.

*It is essential to maintain good hygiene and cleanliness. Mouthwash and povidone-iodine gargles should be used on a regular basis.

*When delivering oxygen, the water for humidification must be sterile, and the humidifier should not leak.

*With rigorous blood glucose management, steroid use should be limited to no more than is absolutely necessary.

*Unnecessary use of broad-spectrum antibiotics and antifungals should be avoided since they deplete the typical commensal flora, allowing unwelcome organisms to thrive due to a lack of competition.

*Avoid going outside as much as possible.

*At home, the environment must be clean, dust-free, and damp-free.

*Keep your mouth and nose clean.

*Always wear an N-95 mask when going out.

*Fungi can be found in abundance in soil and plants. As a result, gardening and working with soil should be avoided. Masks, rubber gloves, and boots must be worn if at all possible.

“The significant take-home messages are that opportunistic fungal infections do occur in COVID-19 patients, that raising awareness among health care providers and the general public is critical, that early diagnosis and aggressive treatment are critical for improving outcomes in an otherwise dismal condition, and that working together we can surely win this battle against COVID 19 and mucormycosis,

What is White Fungus disease?

In comparison to black fungus, white fungus has been documented in fewer cases. Some of its symptoms are similar to Covid’s – cough, dyspnea and chest pain; some patients also complain of headaches and edema. People with a weak immune system and those who live in filthy environments are more likely to contract the white fungus. Experts suggest that people with diabetes, cancer, or long-term steroid usage are more at risk. Treatment delays can be exceedingly harmful.

White fungus infection patients have symptoms that are comparable to COVID-19. The four cases of white fungus reported in a Patna hospital had COVID-like symptoms but did not test positive for the virus. In all of the cases, the patients\’ lungs were determined to be infected. The symptoms are sometimes mistaken for black fungus.

Because the white fungus affects the lungs and chest, it can cause coughing, chest pain, and shortness of breath. Inflammatory symptoms such as swelling, infections, and persistent headaches and pains may occur as a result of the infection.

The infection is diagnosed using X-rays and CT scans, and the patients are treated with anti-fungal medicine. Antifungal drugs were administered to the patients in the Patna cases, and they recovered.

The first step is to avoid becoming infected with Covid. As a result, it is critical to boost immunity. During covid therapy, do not overdo steroids. Steroids should only be given if the oxygen levels drop and pneumonia develops. Reduce the number of steroids when the condition is stable so that blood sugar levels do not fluctuate. In this method, white and black fungal infections can be avoided.

There Are 7 Ways That Online Degrees Might Help Students Advance In Their Careers.

Covid-19 : The Black Fungus, Symptoms, Cause and Treatment - Explained