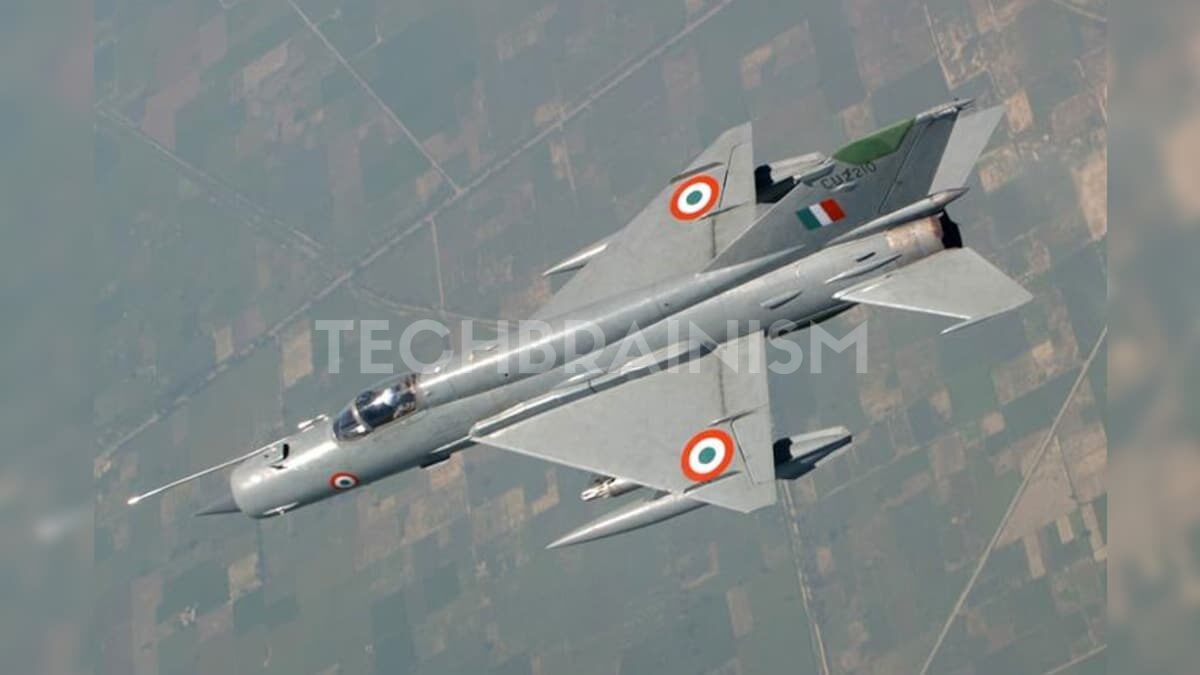 Earlier on Thursday evening, two pilots were killed on when an Indian Air Force MiG-21 Type 69 Trainer aircraft crashed during a training sortie in Rajasthan’s Barmer, killing both the pilots including a youngster Flight Lieutenant A Bal and Wing Commander Rana.

The MiG-21 Bison, one of India’s six fighter jets, is of Russian origin. It is a single engine, single seater multirole fighter aircraft. It has a maximum speed of 2,230 km/hr and carries one 23mm twin-barrel cannon with four R-60 close combat missiles. It is described as the “back-bone” of the IAF.

MiG 21 “Bison” is a single engine combat capable fighter jet specially upgraded for Indian Air Force. It is exclusive to Indian Air Force as it is customized according to Indian needs. It is equipped with state of the art avionics like helmet-mounted sights and multifunctional display screens.

This version of the MiG 21 — the last in a series of at least 15 variants — was flown for the first time in 1976. The MiG-21 Bison is described as an all-weather, multi-role fighter. It was inducted in the Indian Air Force in the early 1980s. India reportedly has 100 odd aircraft in its fleet.

MiG21 variants have been flown by nearly 40 countries. The former USSR began manufacturing these aircraft in the last 1950s. It still has a reputation as the world’s best fighter jet, with some 11,000 aircraft produced. Each has a life of up to 30 years.

Incidentally, a year ago, flying officer Avani Chaturvedi created history by becoming the first Indian woman pilot of the IAF to complete a solo flight in a MiG-21 Bison. Chaturvedi was from the first batch of three women officers who were commissioned as fighter pilots in the IAF in June 2016.

It is observed that the plane has been plagued with serious maintenance problems. From 1970 to 2013 at least 14 MiG’s have been crashed. These crashes are not only due to engine problem but also due to weather conditions.

The Indian Air Force due to lack of budgetary cuts is not able to purchase newer aircraft and has to make do with refitting new technology in an older machine. Due to these crashes, the plane has earned the name ‘Flying Coffin’ and ‘widowmaker’.

More than 400 MiG-21s have been involved in accidents that have claimed the lives of more than 200 pilots during the last six decades, earning the fighters ominous epithets such as “Flying Coffin” and “Widow Maker”.

Experts have said that more MiG-21s have crashed than any other fighter because they formed the bulk of the fighter aircraft in the IAF’s inventory for a long time.

IAF had to keep its MiG-21 fleet flying longer than it would have liked because of delays in the induction of new fighters.

The MiG 21 Bison crash today is the 5th this year involving the fighter. MiG-21 conducted the first flight on 14 February, 1955. It’s in service with the IAF since 1963. Current MiG-21 Bisons were upgraded first just twenty years ago , but those platforms are from early 80s. It has served well, but please, no more..

The aircraft has a delta wing which permits it to take turns without any rapid loss of speed. It has an operational range of 1210 Km, Flying speed of Mach 2 (2175 Km/h) and a surface ceiling of 17.8 Kms which makes it one of the best aircraft in its 3rd generation league.

After the Pulwama attack, the Indian govt has scaled up its military activity and adopted its “Offensive Defence” strategy. In retaliation to 26 Feb attack of the Indian Air Force where they conducting air strikes at Balakot, the Pakistan Air Force on 27 Feb planned to attack Indian Military bases with USA’s F-16 Aircraft. The Indian Air Force was ready with its interceptors and shot down one of the F-16s. Though the Indian MiG-21 piloted by Wing Cdr Abhinandan was also shot down but the global reaction was majorly focused on the fact that how did the Indian Pilot achieve this feat let’s look at the specification of the two aircrafts:

The MiG 21 also went under significant up gradation in 2006 with Multi-mode Radar, Better avionics & communication systems to give an edge over other aircraft. It was then renamed ‘MiG -21 Bison’. It was also fitted with R-73 Archer short range and R-77 medium-range anti-aircraft missile. It was also equipped with Helmet mounted displays which assisted the pilot while engaging in a dogfight.

Although these aircraft are more than 50 years old, even today an upgraded MiG 21 aircraft can compete with any modern aircraft in the sky. The fighting capability of these MiG series aircraft is intact even today and it is infallible but the record of this aircraft is not very good in terms of safety.

Here are the five reasons believed to be behind the crashing of MiG series planes: (Source: According to ZeeNews)