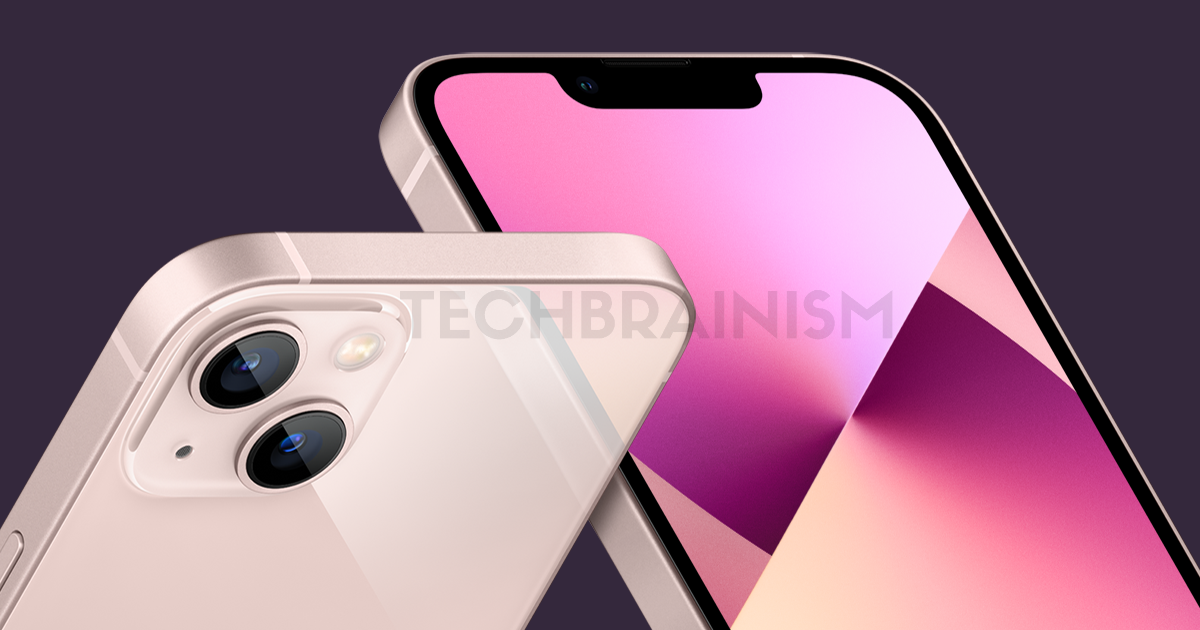 The iPhone 13 brings a few subtle updates compared to the iPhone 12, but you might find that the previous year’s model offers better value. This phone has a bright, vibrant 6.1-inch OLED screen, but with only a 60Hz refresh rate and an annoying notch. The A15 Bionic SoC provides more than enough power for gaming and heavy apps. The cameras are versatile and deliver great quality for stills as well as video, plus you get the same Cinematic Mode and Photographic Styles features as on the more expensive iPhone 13 Pro. Battery life is good, but not great. iOS 15 keeps everything running smoothly. You can choose between 128GB, 256GB and 512GB of storage. The iPhone 13 mini is equivalent in terms of features and performance.

The Apple smartphone comes with a sleek and durable design that has flat edges and an elegant aluminum frame thus giving users a slip-free grip. The dimensions of the iPhone 13 measure 147 mm x 72 mm x 7.65 mm (height x width x thickness) and it weighs approximately 174 grams hence the phone is very easy to hold. Besides, the phone comes with an IP68 rating that protects it from spills from common liquids. The iPhone 13 can be bought in 5 different colors – pink, blue, midnight, starlight, and (PRODUCT)RED.

Speaking about the display, iPhone 13 has a 6.1 inches Super Retina XDR OLED display with a screen resolution of 1170 x 2532 pixels at a pixel density of 460 pixels per inch (ppi). Hence, users can enjoy watching videos and playing games with crystal clear images.

Users can buy the iPhone 13 in different storage variants – 128GB priced at Rs. 79,900, 256GB available at Rs. 89,900 and 512GB costing Rs. 1,09,900. The massive storage capacity options allow users to store their data and files without any space restrictions. Also, the speed of the iPhone 13 is highly commendable. Furthermore, the Apple iPhone 13 has A15 Bionic as its engine, which is faster and offers an appreciable performance with commendable power efficiency. A15 Bionic users the 5-nanometer technology and comprise approximately 15 billion transistors that are capable of tackling the most demanding tasks.

Apart from this, the iPhone 13 comes with the Cinematic mode that records videos with a depth effect and with automatic focus changes hence you can capture moments in cinema-style.

iPhone 13, a dual-SIM (GSM and GSM) smartphone, supports wireless and proprietary fast charging. The battery life of this Apple phone is very impressive while the mobile gets charged in a very less time. Also, you can make calls, capture videos and pictures, attend meetings online, and do other tasks without any worries of battery drainage.

There are numerous connectivity options that are supported by the iPhone 13 such as 5G supported by the device (network not rolled out in India), 4G (supports Indian bands), 3G, 2G, Wi-Fi 802.11, a/ac/b/g/n/n 5GHz, Bluetooth, mobile hotspot, GPS, and more. In addition to this, there are several sensors on the mobile for a better user experience that include Face ID, proximity sensor, accelerometer, barometer, three-axis gyro, and ambient light sensor.

The iPhone 13’s brighter display, longer battery life and powerful cameras make it the best iPhone for the money. But we wish it had faster charging and the iPhone 13 Pro’s adaptive 120Hz display.

The iPhone 13 is the smartphone for everyone not looking for a specific feature. It lies between the mini and max sizes while offering just the right amount of features to make it worthwhile. Those looking for a better display or more camera features will choose the more expensive pro version.

The design didn’t change much year-over-year, with only a slight thickness increase, diagonal camera arrangement, and smaller notch. Features like MagSafe charging are still here, and Apple increased the base storage from 64GB to 128GB at the same price.

We feel that this release would have constituted Apple’s classic “S” naming scheme, so 12S rather than 13, due to the upgrades presented. Apple generally only brought about camera changes and battery life improvements for “S” years, which is mostly what we see here.

The shrinking of the notch seems to be a double-edged sword for the company. On the one hand, the notch is smaller, and the technology being used for the system has shrunk to fit. On the other hand, Apple isn’t doing anything with the extra space.The smaller iPhone 13 mini may be the last of its kind

Customers who don’t have in-depth knowledge of the iPhone will see the notch as an eyesore when compared to the competition. Samsung and others have moved to hole-punch cameras that enable eye-catching edge-to-edge displays, but Apple has to stick with its “old” notch design. The notch still exists for the True Depth camera array that powers the secure Face ID system, but knowing that won’t assuage the average user.

The A15 Bionic is more powerful, but users won’t notice when performing most tasks. However, the overhead provided by the powerful chip will enable fast iPhone operation for years to come. The increased battery life metric is primarily thanks to improved efficiency brought on by the processor.

Photographic Styles and Cinematic Mode are sure to wow many new customers, but it remains to be seen how much people will be bringing the features to everyday use. Despite its early flaws, we liked Cinematic Mode and expect it will improve with time.

We believe anyone coming from an iPhone older than the iPhone 12 series will be wowed by the battery life and camera upgrades found here. The year-over-year upgrade is more difficult to sell, but there is enough here to justify it for some. Regardless, Apple has another winning smartphone, and we believe the iPhone 13 will wind up being 2021’s most popular model.

Monkeypox, Cases in Europe & US are 'Puzzling Experts', All About The Rare Viral Infection EXPLAINED